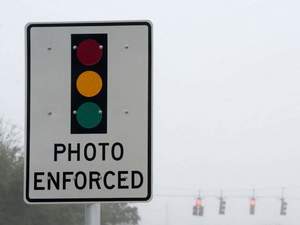 A bill to repeal Florida’s law permitting the use of cameras to ticket motorists who run red lights began moving through the Legislature on February 14, 2013, with its narrow approval by a House committee.

The law passed three years ago ended legal disputes over whether local governments, some of which already had installed the cameras, have the legal authority to do so. It also set uniform fines and diverted most of the proceeds to the state.

The only red-light cameras in the Pensacola area are in Gulf Breeze and Milton.

Law enforcement officials argued against repeal, saying the cameras reduce accidents and save lives. Opponents contend studies backing up those arguments are flawed and that the real issue is money.

Milton Police Chief Greg Brand said the numbers he has to prove that the cameras work. In June 2011, 1,300 people ran red lights at the three intersections the city has them installed at.

Now, he said, the numbers are closer to 300 a month at the monitored intersections.

“For me, it has exceeded our expectations …” Brand said. “My interest is reducing the frequency of red-light running, and we have done it.”

“I know what safety is,” said Rep. Daphne Campbell, a Miami Democrat who is sponsoring the bill, after citing her experience as an emergency room nurse. “This law is strictly revenue-driven.”

The state gets $83 of each $158 fine. That amounted to $51 million in the last full budget year. Local governments and camera contractors get the rest.

In the fiscal year ending last June, 73 agencies gave out nearly 1 million citations for violations at 404 intersections fitted with red-light cameras, according to a state survey. Those agencies reported a 41 percent decline in rear-end collisions and 44 percent drop in side-impact crashes.

Local officials insist their cities and counties aren’t getting rich on the fines. Kathy Russell, a lobbyist for Orlando, said that over a two-year span her city collected $6.1 million in fines but netted only $300,000 after paying the state’s share, the contractor that provides and operates the cameras and related expenses.

The attempted repeal is the third in as many years since the law was passed in 2010. The House narrowly passed a repeal bill in 2011, but it never got a floor vote in the Senate. Repeal bills failed to get out of committee in both chambers last year.

The Economic Affairs Committee voted 10-8 for the bill, which is on a fast track in the House with only one more committee stop — Appropriations — before a possible floor vote. It may have problems in the Senate, though, was no similar legislation yet has been filed.

Camera opponents also contended enforcement is focused on low-income communities where the people can least afford tickets and that it’s unfair for vehicle owners, who get tickets in the mail, to be considered guilty unless they can prove they’re innocent.

“Anything that curbs people’s behavior in driving helps save lives,” Haines City Police Chief Rick Sloan said as he urged lawmakers to defeat the repeal.

He said 6,000 tickets were issued the first-month cameras were installed at nine intersections in the Central Florida city, but now it’s dropped to no more than 2,000 monthly.

Orange County Sheriff’s Capt. Michael Fewless said a personal experience supports the claim that the cameras cut down on violations.

The law makes owners rather than drivers responsible for the fines regardless of who was actually behind the wheel. Fewless received a citation as the owner of a car his son drives. His son denied running a red light until they viewed a video taken by the enforcement camera.

“He ran it,” Fewless said. “There was no question about it. Dad did not write a $158 check. Son did.”
He said he’d have written the check, though, if that would stop his son from running red lights.

“And it has,” Fewless said. “It’s changed his behavior. What I didn’t have to do was I did not have to go to a funeral.”

Republican Rep. Doug Broxson of Gulf Breeze, the first city in Florida to install the cameras, disputed the behavior-changing claims.

“You go to Disney World and then 30 days later you get a little surprise in the mail,” Broxson said. “I do not think that does change behavior. I think it makes you mad.”

“The best way not to get a $158 souvenir after you leave the state is not to run any red lights in Florida,” Williams said.