October 21, 2019
By Law Offices of Edwards & Jones
Careful, Gainesville drivers – That pedestrian who steps off the curb may be a cop aiming to nab you with a ticket for failure to yield to a pedestrian, a moving violation in the state of Florida. 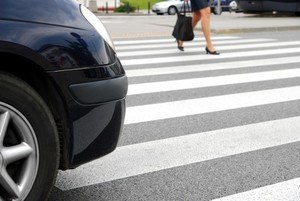 A new initiative by the Gainesville Police Department aims to crack down on drivers who fail to yield to pedestrians – a moving violation in the state of Florida (section 316.130). But are cops stepping over a legal line when they step off the curb? Maybe so, say traffic ticket defense attorneys with Gainesville’s Law Offices of Edwards & Jones Criminal Defense.

The GPD’s Pedestrian High Visibility Enforcement Program essentially is a sting operation. Two plainclothes officers hang out on city curbs, particularly near schools. In five- to 10-minute intervals, one steps off the curb as a vehicle approaches. If the driver fails to yield, an officer waiting ahead is radioed and given a description of the offender, who is quickly diverted to a staging area and cited for violation of Florida’s failure to yield to pedestrians law.

But several drivers nabbed for the violation say they’ve been duped, citing the letter of the law. The statute holds that to require a driver to yield, the pedestrian must be in the same half of the roadway as the vehicle or so close so as to be in danger. It also states that “no pedestrian shall suddenly leave a curb or other place of safety and walk or run into the path of a vehicle which is so close that it is impossible for the driver to yield.”

That’s where some police officers conducting the sting may be running afoul of the law. Some witnesses report that cops involved in the program are leaving the curb suddenly, making it impossible for drivers to yield in time.

If you’ve been cited for failure to yield to a pedestrian in this operation, know that the burden of proof lies with the state, and that you have a right to solid legal representation. Contact traffic ticket defense lawyers with Gainesville’s Law Offices of Edwards & Jones Criminal Defense at 352.377.7800 or via our convenient online contact form.